How to decorate your kitchen ceiling – best design ideas and tips

When you’re redoing your kitchen, it’s a good idea to start with the countertops, move onto the cabinets, and then finish with the walls and floor. However, what about the ceiling? Most people give it a quick layer of paint and end it there – but the kitchen ceiling has so much potential!

Today, we’ll look at the reasons why you should design the kitchen ceiling, and share some gorgeous ideas for the perfect ceiling design.

Why should you design the kitchen ceiling?

Most people don’t show off their ceilings. There’s no real reason behind it – it’s just how things are. People don’t often look up at ceilings and say “Oh, what a beautiful ceiling!” Plain, utilitarian ceilings are the norm. However, that doesn’t have to be the case. Here are some reasons why:

1. Because you want a finished look

If your entire kitchen’s vibrant and green, you don’t want the ceiling to be drab and white. You want a finished look, and the ceiling is certainly part of the space, so your kitchen ceiling design needs to take that into account.

2. Because you can go overboard

Suppose you’re going with a complex theme – flowers, say, or nature. You can’t go ahead and install a stuffed tiger into the kitchen, or paint the cabinets with flower patterns. It’d be too noisy, too complicated. But you can do that on the ceiling. It’s a space where you can go overboard and create your own Sistine Chapel.

3. Because it’ll last a while 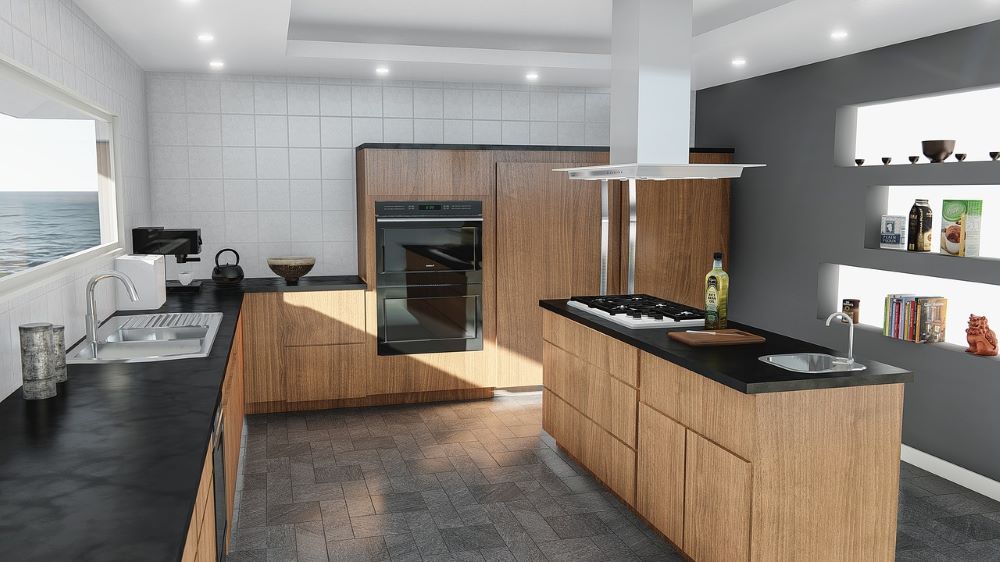 The kitchen floors, cabinets and countertop get lots of use – they’ll have to be changed and redesigned in a few years (or decades, as the case may be). The ceiling, however, will last. Of course, it’ll need cleaning every now and then because of all the smoke, steam and dust, but the design will last you a lifetime.

4. Because it doesn’t cost a whole lot

If you can make a strong impression for a relatively small amount of money, why miss the opportunity? Painting or otherwise decorating the ceiling isn’t a very expensive project compared to renovation costs. Depending on what you want done, it could cost as little as a quarter the cost of getting new cabinets!

Since you’re spending money and redesigning the kitchen, why not spend a little extra and get a beautiful ceiling to match? It’ll last forever (literally), and it’ll take your kitchen’s look to the next level.

Here are some exciting kitchen ceiling ideas that’ll turn your kitchen into a masterpiece. Have you ever had people compliment your ceilings? Well, you will now!

What do you see when you look up outdoors? What do you wish you saw when you looked up? Why not incorporate that into the design? Clouds and sunlight, or stars and moonlight – it’s your choice. While the former would make for a bright daytime look, the latter would be mesmerizing – especially since most of us city folk rarely get to see stars.

See what would work better with your kitchen’s overall design and theme. If the design’s light and airy or has largely light colors, for instance, a sunny sky might look better. If both don’t work, try something different – how about the northern lights, or a stunning sunset with fiery pink clouds? For a minimalistic kitchen, try a sunny sky with cirrus clouds.

From koi fish to flowers to patterns – some designs never go out of style. If you don’t want to put too much thought into it and just want a good-looking design, go with something popular – after all, it’s popular for a reason.

You could try a scenery including flowers (like branches of wisteria draping over you), leaves (a tree overhead), an underwater scene (as if your kitchen’s under a glass wall), or go with something simpler like a pattern – stripes, circles, triangles, maybe some funky modern art.

Just remember that when painting you want to keep it realistic. So don’t paint, for example, a building or the Eiffel Tower on your ceiling. You don’t usually see them horizontally when you look up. You could try a 3D look, but frankly, we don’t recommend it. It’s dizzying, distracting, expensive, and after some time the novelty fades and you’ll find it looks weird from a lot of angles.

If you want a completely different, otherworldly look, tiles are one of the best ceiling ideas for your kitchen. Have you ever seen tiles overhead? They usually look slightly odd, but if you pick the tiles carefully you can cross the line from plain and office-like into intriguing. Tiles come in different sizes, materials, patterns, textures and colors, so you definitely have plenty to choose from!

For a clean, modern look, go with plain white tiles. They won’t be distracting or strange, but they’ll introduce a subtly futuristic look to the space. While this would be best paired with a modern kitchen design, a tiled ceiling might work with an antique kitchen as well!

When considering this option, also give false ceilings some thought. They’ll heighten the drama and intensify the look manifold. False ceilings actually have a lot of benefits – they’re generally a pretty good idea for small spaces if you’re renovating and have a sufficiently large budget. For a slightly busy look, you could try out mosaic tiles. They’ll look quirky and unique. 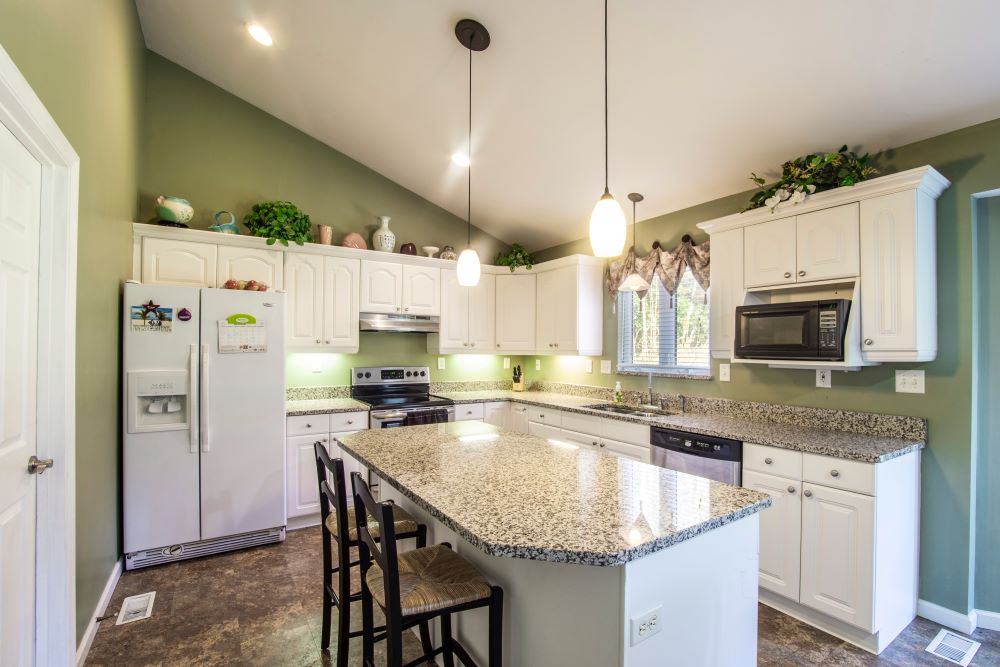 How do you feel about a chandelier in the kitchen? It won’t work in most kitchens since they have a utilitarian, homey look, but if yours is going to be antique and classy, a chandelier might be the perfect item to finish off the look! Make sure it won’t get in the way or be a hazard – choose the product carefully, and your kitchen will be stunning.

Now, skylights are my favorite, because nothing can beat a gorgeous sky view. And when it rains, the sound of raindrops drumming on the glass is wonderful. If they aren’t possible (if you’re living in an apartment, for instance), long lamps also look great. You can position them above the kitchen island, where they’ll serve a dual purpose.

Instead of kitchen ceiling ideas that include paint or light fixtures, how about designing the ceiling’s structure instead? You could go with a charming barn-style look with exposed beams, for example. You can keep the natural wood look for a rustic appearance, or paint them the same color as the ceiling for a cleaner, more modern look. 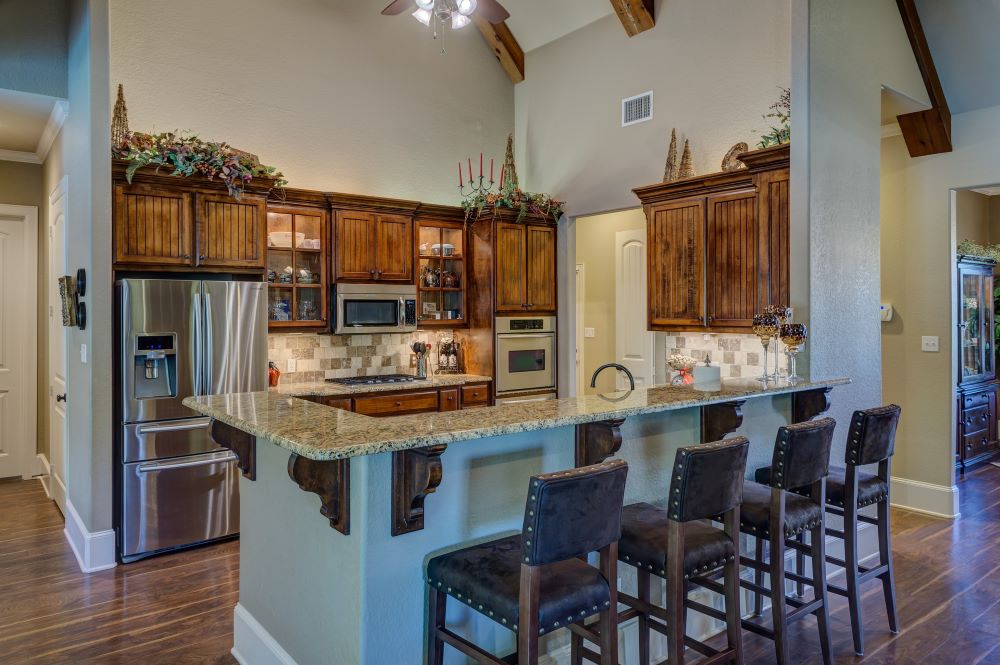 Coffered ceilings are another good option. There’s a lot of texture so you don’t want this in a kitchen with a messy or busy look, but it’d contrast well with a simple kitchen. If you’re making a new home and can restructure parts of the house, you can try a vaulted ceiling. It could be a simple vault, or a shed style look where it just angles up one way. Another option for those with a large budget is a groin vault. It’ll look luxurious and classy; it’ll be the envy of the town.

These were some of our favorite modern ceiling designs for kitchens. We hope they helped get you started – or at least gave you an idea of what kind of design you want. For more posts about kitchen design and renovation, follow Mastering Kitchens! 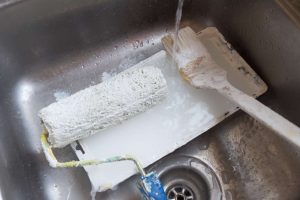 How To Remove Dry Paint From Kitchen Sink – Effectively! 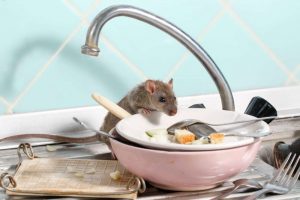 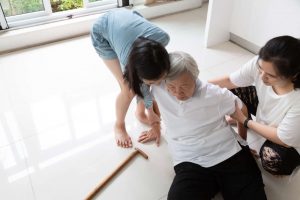 How To Prevent Falls in the Kitchen at Home (Family Safety) 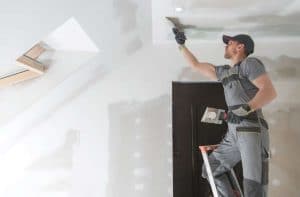 How to Start a Remodeling Business: Step by Step Guide 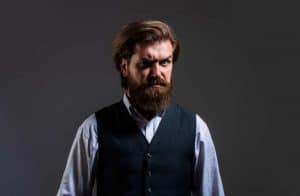 Why Is Kitchen Remodeling So Damn Expensive? (Cost Breakdown) 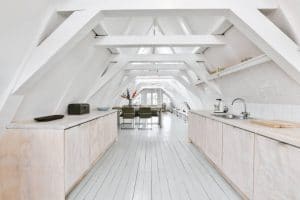 What Is the Best Lighting for a Galley Kitchen (Inspiration Photos Included)?

” Helping homeowners master their kitchen renovation and design projects. The secret to a successful kitchen upgrade job is the planning phase! “

Welcome to our community!

Here are a few ideas for you. 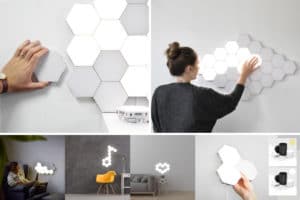 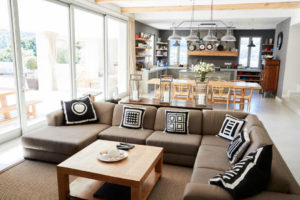